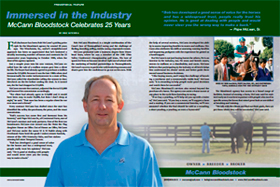 Full disclosure has been Bob McCann’s guiding principle for the bloodstock agency he created 25 years ago. The Winchester, Ky., native’s straightforward approach has been so appreciated that he’s brokered a steadily increasing number of horses and contracts for 22 consecutive years beginning in October 1986, when the door of his agency opened.

Just a couple years into his new venture, McCann recalled how the sale of a stallion season gave him a client for life. The buyer had already agreed to purchase a stallion season for $15,000. Because it was the late 1980s when stud fees—actually the entire industry—were in a state of flux, McCann called the shareholder selling the season to double-check on the fee before sealing the deal. As it turned out, the fee had dropped to $12,000.

McCann rewrote the contract, adjusted the fee to $12,000 and lowered his commission accordingly. “The client had already agree to $15,000 and it would have been easy to make $3,000, but then I don’t sleep at night,” he said. “Th at man has been a regular client for me ever since and a friend.”

One of my recent newborn foals. This is a colt by Discreetly Mine out of my mare Gowestforgold.

"It is the glorious uncertainty of horse racing that makes it the most fascinating and exhilarating sport in the world".